Top Posts
The Impact of E-Commerce on Parcel Delivery Industry
Who is Dolly Parton, the queen of country
With Snapchat, you can now send money through...
Ibotta Review: Earn Cash by Taking Photos of...
What is costco?
Corporate Videos And Institutional Films
Who can see our IP address and what...
Gas Bill Payment Is Your Worst Enemy. 6...
Tokenomics and the role played by them in...
Who is subject to the farmer’s liability insurance?
Home Reviews VR Camera Review
Reviews

Did you see that VR Camera?

Have you ever thought about what it might be like to relive the best moments of your life, and be able to share them with others? Maybe it’s the dance floor at your wedding. Or the birth of your child or his or her first birthday. Maybe it’s that touchdown that led your team to victory in the last seconds of a game. With today’s mobile virtual reality technology, it’s possible to create virtual memories and it has never been easier to get started.

Humaneyes Technologies, an innovator in camera technology, has developed a user-friendly, dual camera that combines 360-degree photography with immersive 3-D Virtual Reality (VR), all in one simple-to-use solution that costs about the same as a decent DSLR
camera.

“360-degree pictures and video continue to change how we use cameras to capture the world around us,” says expert. “And the global adoption of VR headsets, combined with 3-D cameras, is providing even more ways to create virtual content. And virtual memories also.”

“We’ve done it with the best, from documenting Mako sharks with The Discovery Channel. This is to weightless experiences in the International Space Station, floating more than 250 miles above the horizon.”

The Vuze XR flips easily from a 360-degree camera to a VR180 camera and shoots both virtual video and photos. Whether you’re recording or live streaming, users can create and share virtual experiences at that moment. And then save them to revisit next week or next decade. Special features of the VUZE include 18-Mega Pixel still images, built-in stabilization, filters, and a VR editing suite. Plus, it doesn’t get more portable.

“Everything can be viewed, controlled and edited, right from your phone. So that you can shoot, create and share virtual videos at a moment’s notice,” says Malcolm. But not everything needs to be virtual; the VUZE also functions as a 5.7K and 4K up to 60fps 2D camera for capturing high-resolution video and pictures.

Think ahead to the holidays and how the VR Camera latest in VR technology can help make unforgettable memories. And connect far-flung family and friends. The VUZE XR camera also features live streaming and social sharing for platforms, including Facebook and YouTube. So that you can bring your social media audience into the scene with you. 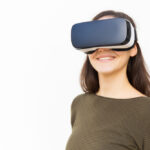 The technology used in virtual reality has been leveraged profitably for many uses. Virtual reality techniques are used on a wide scale to devise entertaining games for people. Virtually real platforms help people to take part in situations which they normally cannot be a part of. For instance, everybody does not have the time, energy, will or the wish to be a mountaineer in real life. But you can easily be a mountaineer in an environment that is virtually real.

You can actually feel the dangers and the thrills present in an environment powered by virtual reality. If you ever fall into the midst of the Pacific Ocean and swim out alive, you’ll have to remember that you just had a lucky break, that if you fall in again, you might not be alive anymore.

But you can fall into any ocean while you’re taking part in a virtually realistic game. As many times as you want and be sure to remain unscathed always.

Apart from games, virtually real technology finds extensive application in the tourism industry. Tourists are frequently taken to cinema halls where virtual reality in the form of cinemania is shown to them. They have to sit in comfortable seats, and strap themselves to the seats with seat belts.They are really made to feel as though they’re walking through dungeons or forests in these ‘virtual reality’ equipped cinema halls. They can hear the screeches of wild animals and can even feel them brushing by their sides. Such cinemania complexes exist in Singapore, Rome and other hot tourist destinations.

In History, Science and Crime

The software and systems help to recreate situations as they were originally. Historians and scientists can visit ancient caves and feel how Stone Age men lived with the help of virtually real technology.

Crimes scenes can be re-made too using virtually real technology and this may aid police and detectives to solve crimes and identify culprits after understanding culprit movements as they had been in the place of the crime, upon its re-creation using virtual reality.

Virtually real technology is also used to a great extent in the field of medicine for therapeutic purposes. And for treating people with various limb and other disorders. The famous Santimamine Caves of the Stone Age have been recreated using virtually real technology. Existing scientific, topographical, geographical and other data have been integrated with the virtual reality technology.

Virtual Reality in Business and Industry

Virtually real technology finds numerous applications in the world of business and industry too. With the help of simulation, which is an integral part of this technology, new prototypes and products can be built. CAD, CAM, and other mathematical and engineering techniques, which belong to the domain of virtual reality, are widely used in the automobile, naval, the aerospace and in other manufacturing industries to enable the building of cars, ships, airplanes and machines.

The theory of probability in Mathematics is a way of determining when a certain action can occur in the real world.

There is no need to organize elaborate conferences, no need to spend money on booking venues, on paying the airfares of several. Web and video conferencing improves employee productivity as it minimizes employee downtime such as working hours spent in traveling.

Finally, the concept of virtual reality includes in its bailiwick, certain smart business and meeting software such as Meeting Diary. Meeting Diary is a virtual event manager and a virtual planner that plans meetings and conferences on your behalf.

Meeting Diary is an action-oriented software. It drives you to restructure your thoughts and realign your actions, streamline your tasks and think creatively.

VR Camera- It impels you to unleash your entire potential in a disciplined, systematic and goal-oriented manner. It enables you to coordinate and always be one of the frontrunners in a fast-paced environment. It urges you to be part of the vanguard, wherever you go.

Meeting Diary’s an application that comes sans any price tag. Though virtual and intangible, it’s a reality more solid than the PC or laptop you’re using, than the blocks of the building you’re sitting in. It helps you fulfill your ambitions and realize all your aims, seamlessly.

The Smart Home and Our Connected Life